Movies are a huge passion for millions around the world. And weirdly so, I get to watch them quite rarely! Thanks to my buddies, I literally fell of the chair yesterday when as I sat laughing and musing over Madagascar 3 – Europe’s most wanted – one the happiest, cutest movies I’ve seen!
It was downright hilarious to watch all the outrageous Rajinikanth stunts being performed by the lady-cop Chantel Dubois – the hideous Animal Control officer Captain thirsty for Lion Alex’s head. The wit & smartness of the animals filled me with excitement all the way -The monkeys, penguins – each one at their wittiest best!

Amidst all the fun, profound messages are baked in all through the movie…
The age-old circus headed by Vitaly (The Tiger) being transformed in totality by Alex who came in with a different mindset! The risks Alex took and the way he got the entire team prepared with absolutely no previous circus experience… The power of self-belief, innovation, risk taking – indeed took them all onto a path of re-invention, putting up a nearly impossible show together!

Vitaly, the excessively passionate Tiger most acclaimed by all – that always did the impossible, retired and hid in a  burrow after a much embarrassing, rather horrifying accident. It retired from taking any risks, ever. It was a treat to watch Alex artfully elicit the states of peak performance by erst-while awesome Vitaly, anchored it and got it to get back to doing the impossible all over again.

Most of the Animals out there modeled Alex’s bravery and alas – Alex ended up doing all of those things that he didn’t imagine possible either. Going past his self-imposed boundaries of comfort and really being a leader. Practicing, what he subtly preached.

Team work at it’s best – Innovation at it’s best – And literally all of the Forming, Storming, Norming, Performing that we saw this entire Team go through.

It’s amazing how each of the animals were each other and how they got together using their individual strengths and team effort together to save Alex from having his head beheaded by the hungry Dubois.

The question really is - how many Vitaly’s are there in your team that were once awesome performers? Do you know what those Inflammable’s are, that destroys confidence and morale of your team?

Do you know how to pull your socks up and align everyone to your vision? In the process, are you now capable of identifying Gia’s (Gia the Jaguar Alex eventually fell in love with) in your team? Those subtle Influencers that make it easier for you, that work for you in their capacity in facilitating the team towards winning?

What matters is – are you an Alex, yet?
Whether you are or not – go watch Madagascar. And likes Alex says, “When humans go all aggressive and passionate, they say they have the ‘Animal Instict’ in them! Go now –  Rejuvenate the Animal Instinct in you and lift your Empire up – a million times more. NLP from a Rural Craftsman

Most times, people assume NLP is this whole bunch of tools and techniques created that makes one perform like he has been injected with performance steroids or some random high performance spirit has entered the person!
Well, maybe!

But the point is – we miss out on the obvious! The fact that NLP itself evolved by modeling those people who were considered geniuses in their fields… Those that produced results consistently! NLP patterns and techniques are only a systematic assimilation of some of the patterns successful people in the world use!
You unconsciously use a lot of NLP too!

I noticed again today how simple and profound it is when someone uses NLP so naturally when in absolute rapport…
I was strolling around ‘Dilli Haat’ – a place where rural craftsmen display their work for sale… As I lay my hands on these beautiful embroider purses, he said – “Only Rs. 350 ma’am. Kitne piece lenge?” (Meaning: How many pieces will you buy?” and I thought to myself! Wow! What a powerful ‘Presupposition’, that! He delivered with such natural charisma in absolute rapport!

There was another lady I picked up some stoles from who spoke about How there’s a lot of handwork on it and it would make me feel rich! Complex Equivalence pattern that!

The question really is – when you already have so much of NLP embedded within you that you may not even realize, how much more awesome can you get when you can power-pack your language, yourself in totality as an instrument to influence just about anybody with just a little more practice baked in along with a whole wealth of awareness of NLP happening all around you! 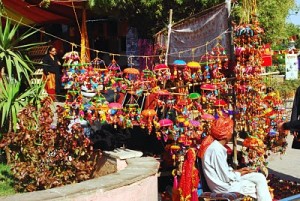